Executive director Jacob Mchangama in interview on free speech and his upcoming book “Free Speech: A History from Socrates to Social Media”    The interview is fully transcripted here:

The United Kingdom moved a step closer to regulating social media in December when a parliamentary committee recommended major changes to the country’s Online Safety Bill so as to hold internet service providers responsible for material published on their platforms. “We need to call time on the Wild West online,” said committee chair Damian Collins. “What’s illegal […]

A new report by the Danish think tank Justitia calls for embedding content moderation in an international human rights framework to ensure common international standards. Yet, critics warn that this voluntary approach is too weak to tackle the ‘Infodemic’. In the report, Justitia says the legislative measures taken in Germany, Denmark or Austria to counter hate […]

Blockchain technology may be the next frontier of free speech. Executive Director Jacob Mchangama tries to contribute with some historical context to this long-read on what blockchain’s so-called “censorship-resistance” entails for the future of free speech. Here at Coinbase 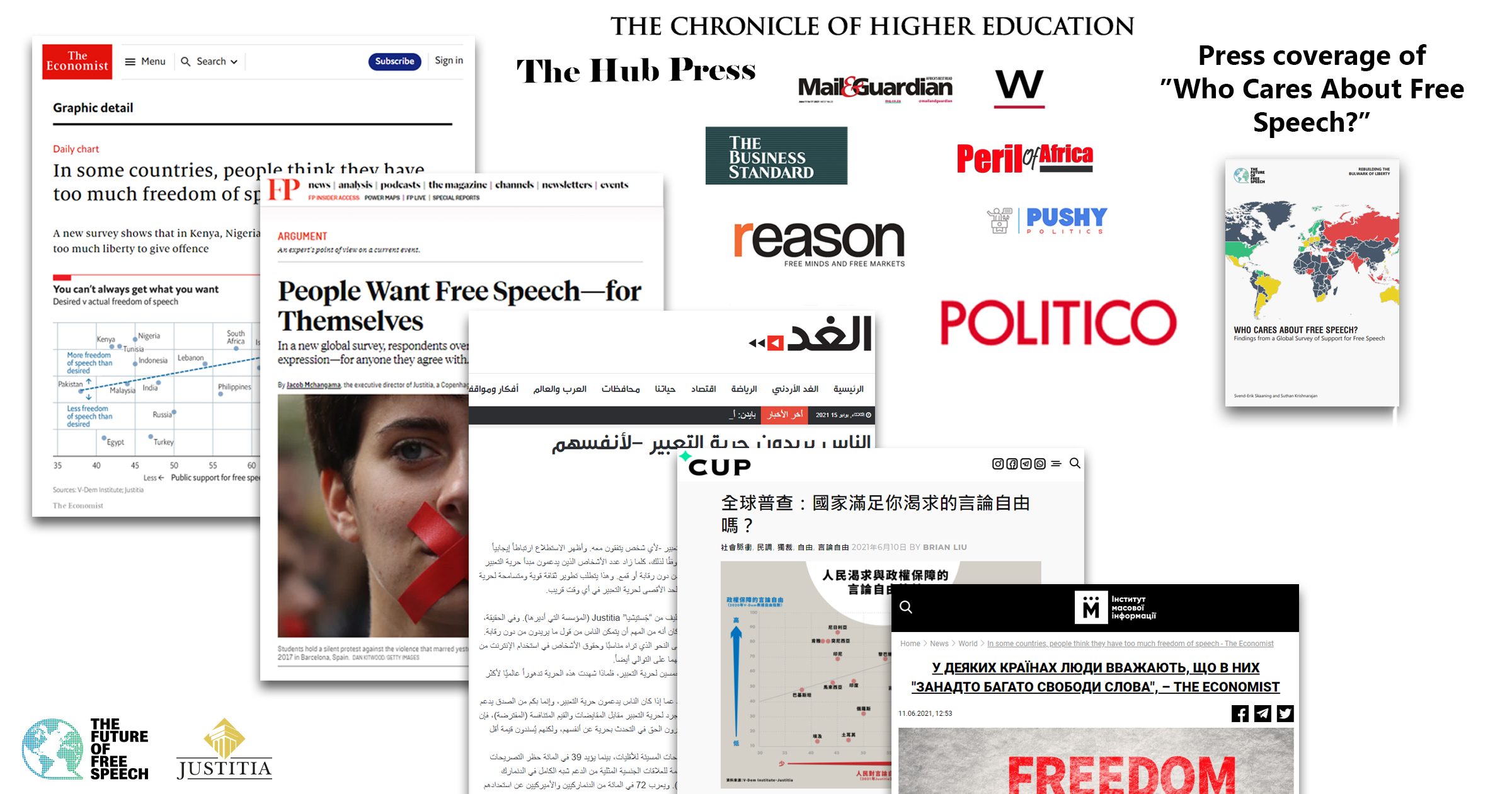 Americans oppose restrictions, but report feeling less free to speak about political matters. Freedom of expression wins strong endorsements around the world when people are asked, say researchers, so why have protections for speech consistently slipped for over a decade? Part of the problem is that many of those surveyed embrace a convenient attitude toward […]

The Justitia Free Speech Index maps attitudes towards hot button issues such as regulation of social media, tolerance of “fake news”, hate speech and blasphemy. The Danish think tank’s research found that people in some countries think they have too much freedom. Justita’s Jacob Mchangama emails that there’s “strong support for uncensored free speech in the abstract,” but when […]

WESTERNERS TEND to regard freedom of speech as a universal good. However, a forthcoming report by Justitia, a Danish think-tank, demonstrates that public support for freedom of expression varies widely among countries, just as legal restraints on speech do. In many countries, particularly authoritarian regimes, people say they want fewer controls. But perhaps surprisingly, in […]

Social media platforms have become indispensable channels for public debate, and yet they are now rarely seen as an out-and-out benefit to democracy. Rather, they are more likely to be seen as transmitting fake news, conspiracy theories and hate. Fears are also growing that private tech companies are exercising too much power over – and […]